Fishing can be an escape from the hectic work lives we live.  Fishing was my entrance into this new passion I found.  I would regularly fish the waters off Longport and Ocean City, New Jersey after working all day.  I would chase striped bass off the jetties in the spring, jig for fluke in the summer and fish for tautog in the winter.  During the fall migration, I would watch mullet and silversides swim in the areas I fished and studied them partly due to my course studies in college as a Marine Science major.  I always wondered how I could replicate that movement using wood (or plastic) without looking unnatural; I was making my own bucktails at the time and called it “The Strategic Angler’s bucktail” just for fun (also because I was losing them at the jetties).

In the fall of 2009, I had the opportunity to travel to Cape Cod to cast lures to surface feeding bluefin tuna.  It was a beautiful October day with no boats in sight and the tuna were everywhere.  Being a surf fisherman and understanding the physics of perfect lure placement, I threw several types of tuna “plugs”, but after chasing and casting for 3 hours straight, did not hook up.  This drove me crazy and could not understand what I did wrong.

I decided to do some research about lure making.  There is nothing better than catching a fish on your own creation after all.  Armed with a wealth of knowledge acquired from my collegiate years, I was unprepared for the task of imitating life at its finest.  The whole lure building process was frustrating because it’s not easy creating something from a simple concept and vision.  I knew one thing for sure, I wanted it to be different.

I spent countless hours sketching designs, trying different woods, changing shapes, and balancing the lures until one day, I had a breakthrough. That happened in 2011, almost 16 months after my first conceptual design. Fellow fishermen and select friends helped with testing the prototypes, giving me valuable feedback on action, pattern and weight.  Then all of a sudden, the lures started catching fish, the ultimate feedback!

I am constantly creating new designs and patterns based on customer feedback.  Each area of the world have a favorite prey species, and I do my best to represent that on my lures.  I enjoy painting new patterns and love seeing the final result. If I can get a good picture of the fish being requested, I can probably paint it.  I continue to push my personal boundaries and am still learning everyday.   Once just a weekend passion, creating lures became a full time career and obsession; an obsession to create what’s best for my personal use (and yours), because nothing but the best matters. 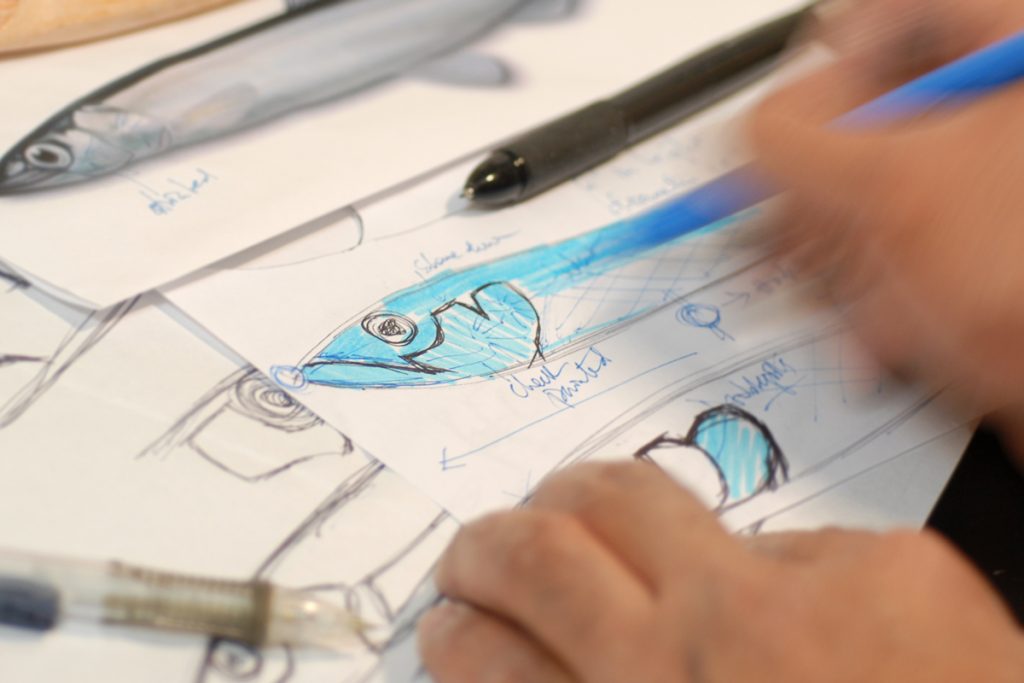 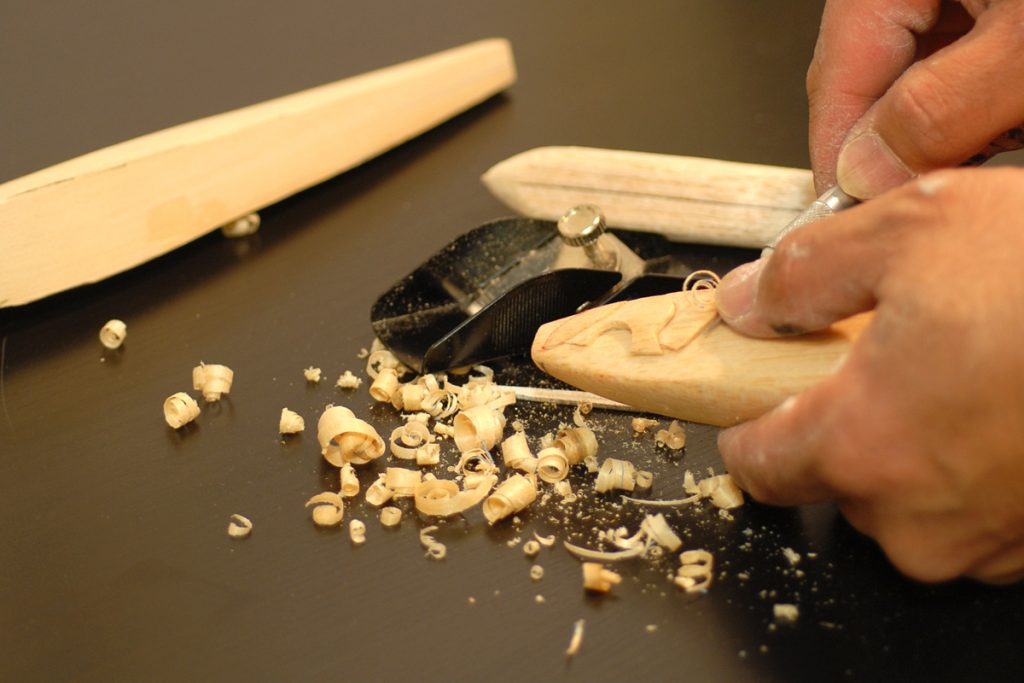 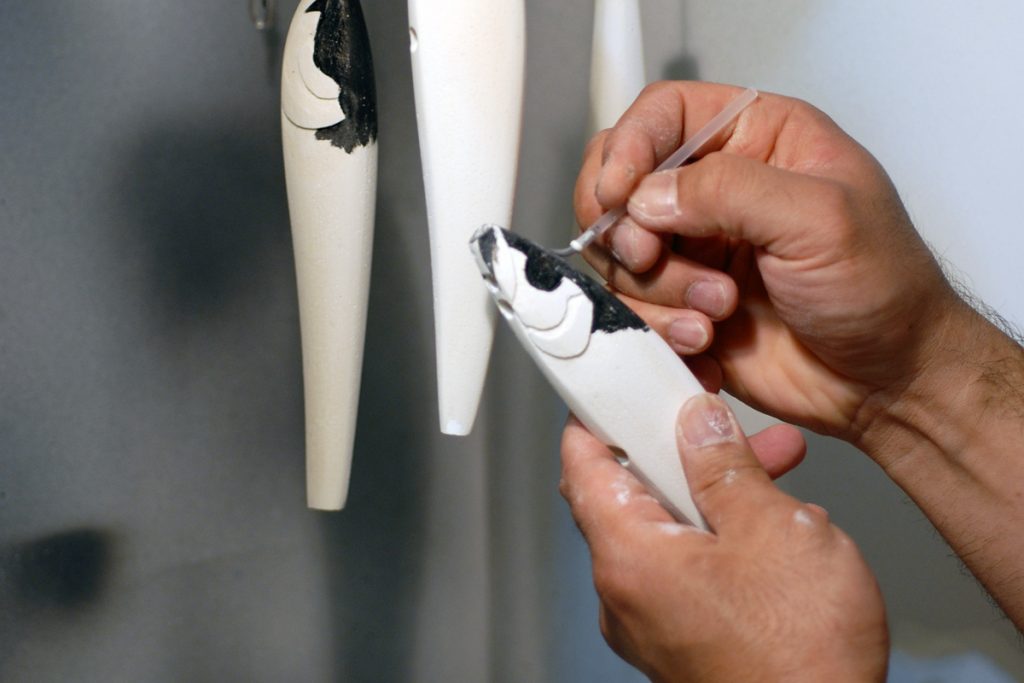 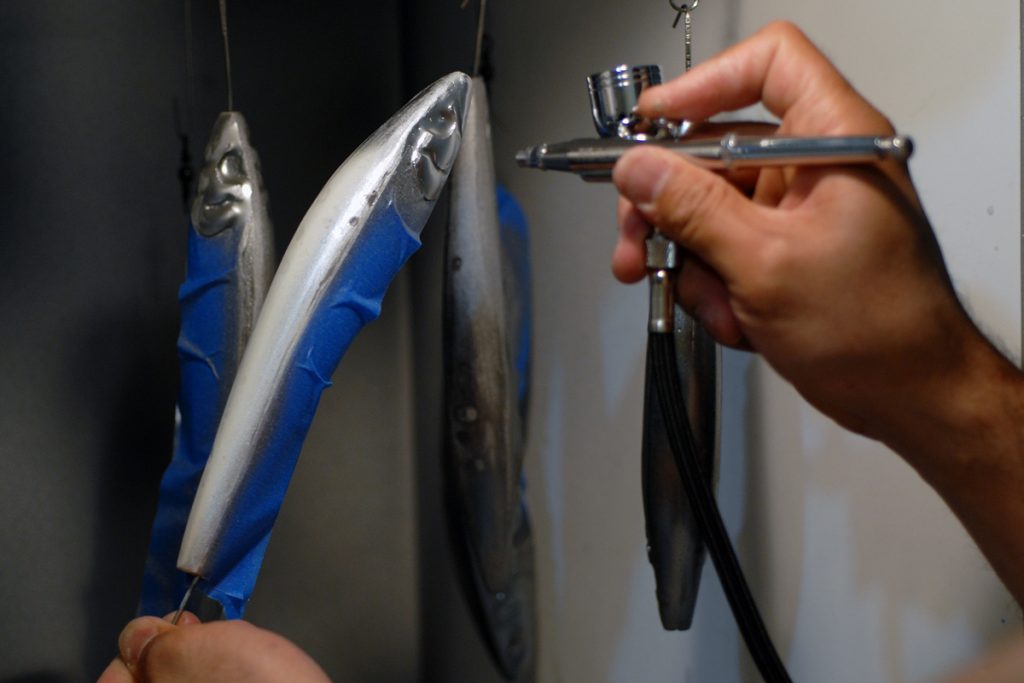 Models of prey species were caught (or purchased) and the design started from there. Proportion, coloration and other variants were taken into consideration when fabricating each lure. As a result, no two lures were the same.

Once the initial concept was designed, a wooden “blank” was created using timber of the appropriate density. The blanks are sealed, ballasted, balanced and then tested rigorously for correct action. After the correct action was achieved, a mold was created for the wooden blank and the first prototypes were balanced for consistency.

Once the perfect body was achieved, paint was airbrushed in layers to provide the utmost depth and realism. The lure was finished with Stainless steel wire, head and tail grommets and 300 lb belly swivel.

The end result was unlike any lure offered on the market. Each lure differed from the next. Only two things stayed consistent. Attention to detail and the ability to land that monster fish! 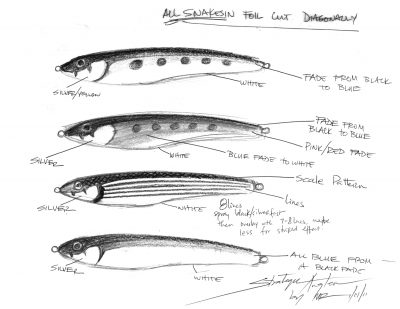 Due to increased demands and obvious health reasons from pouring two part chemicals, Strategic Angler teamed up with a thermoplastics company in the United States and moved its blank production out-of house.  This partner company uses specialized equipment and has the production capabilities to create StrategicAngler® proprietary blanks.  After months of prototyping with key design changes, Strategic Angler custom lures upgraded all their lure bodies with a solid core high impact injection molded plastic. The stainless steel hardware is also incorporated during the injection process, creating one of the strongest lures available on the market strong enough to resist body fractures during normal use and completely eliminates body rot.

Customizing lures can be fun and extremely rewarding. Having a lure designed and created for you gives the lure a special aura, an ownership and definite connection.

At StrategicAngler®, I have the ability to make your design patterns come true.  Adding your boat logo or your personalized name on the back of the lures (approval required), you will be guaranteed to have a great display piece or even a great conversation starter on your desk. 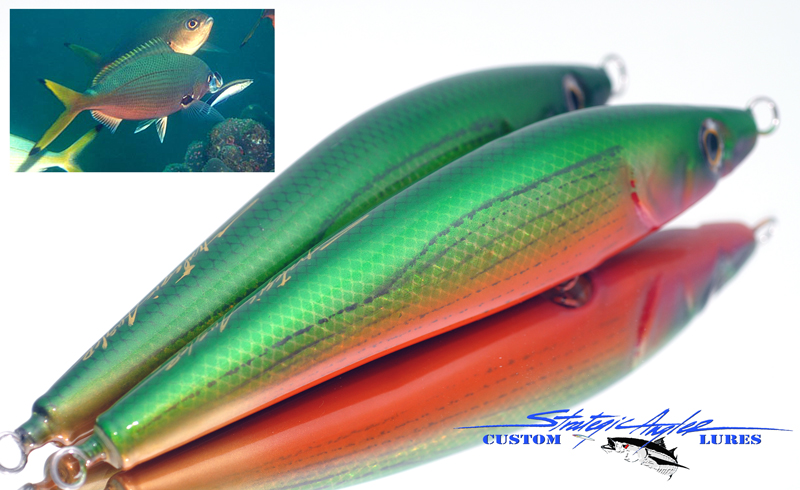 Want a fusilier painted because the GT’s in your part of the world feed on them at certain times of the year? Well, now you can have a lure painted like a reef dwelling Fusilier! 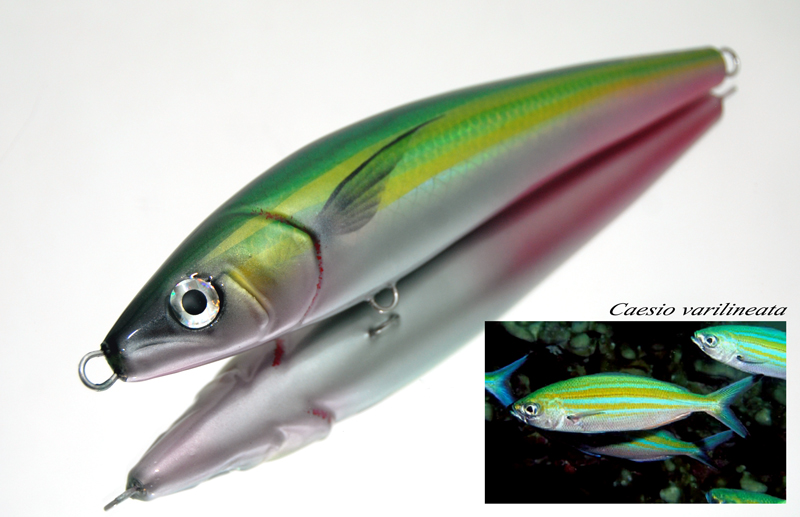 How about a fusilier found only in certain parts of the world?  Caesio varilineata, is one of the predominant reef fish in the Indian Ocean, East Africa, the Red Sea and the Arabian (Persian) Gulf, to western Indonesia. 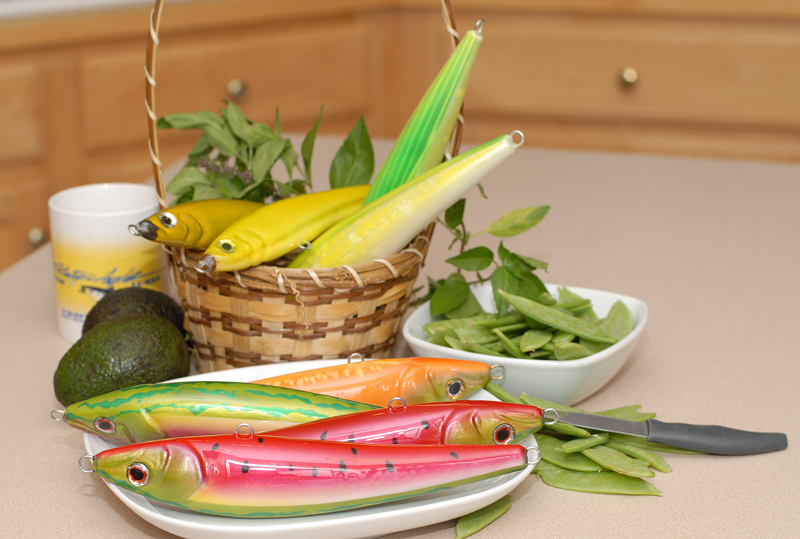 Anything is possible with customizing a lure. Crazy ideas become novel ideas as can be seen with this basket of summer’s bounty featuring watermelon, cantaloupe, sweet corn and even bananas!